WIPO Diary (SCCR38) Day 2: An informal day in the chamber but buzzing around it

The second day of the 38th session of the WIPO SCCR, began with the regular meeting the IPA organizes on Tuesday morning for the representatives of the Creative Sector Organisations Group that we coordinate. On the 13th floor of the WIPO building with sweeping views up Lake Geneva towards Lausanne, we convened a meeting that included representatives of the music, film and collective management sectors as well as publishing. The purpose of the meeting is to brief those who had missed the first day’s action and to plan what we will do for the rest of the week.

Immediately after this meeting, the IPA delegation (see below) met with one of the major WIPO blocs: GRULAC, which includes representatives from Member States in Latin America and the Caribbean. As we’ve done in the past few SCCR meetings, we tabled a letter from one of our members, the Grupo Iberoamericano de Editores (GIE) or the Iberoamerican Publishers Group, indicating that they did not agree with GRULAC’s advocacy of a broadening of exceptions and limitations for education. The discussionsduring today’s meeting are, naturally, confidential but we can report that GRULAC was interested in our position, and that the conversation was detailed, respectful and productive. 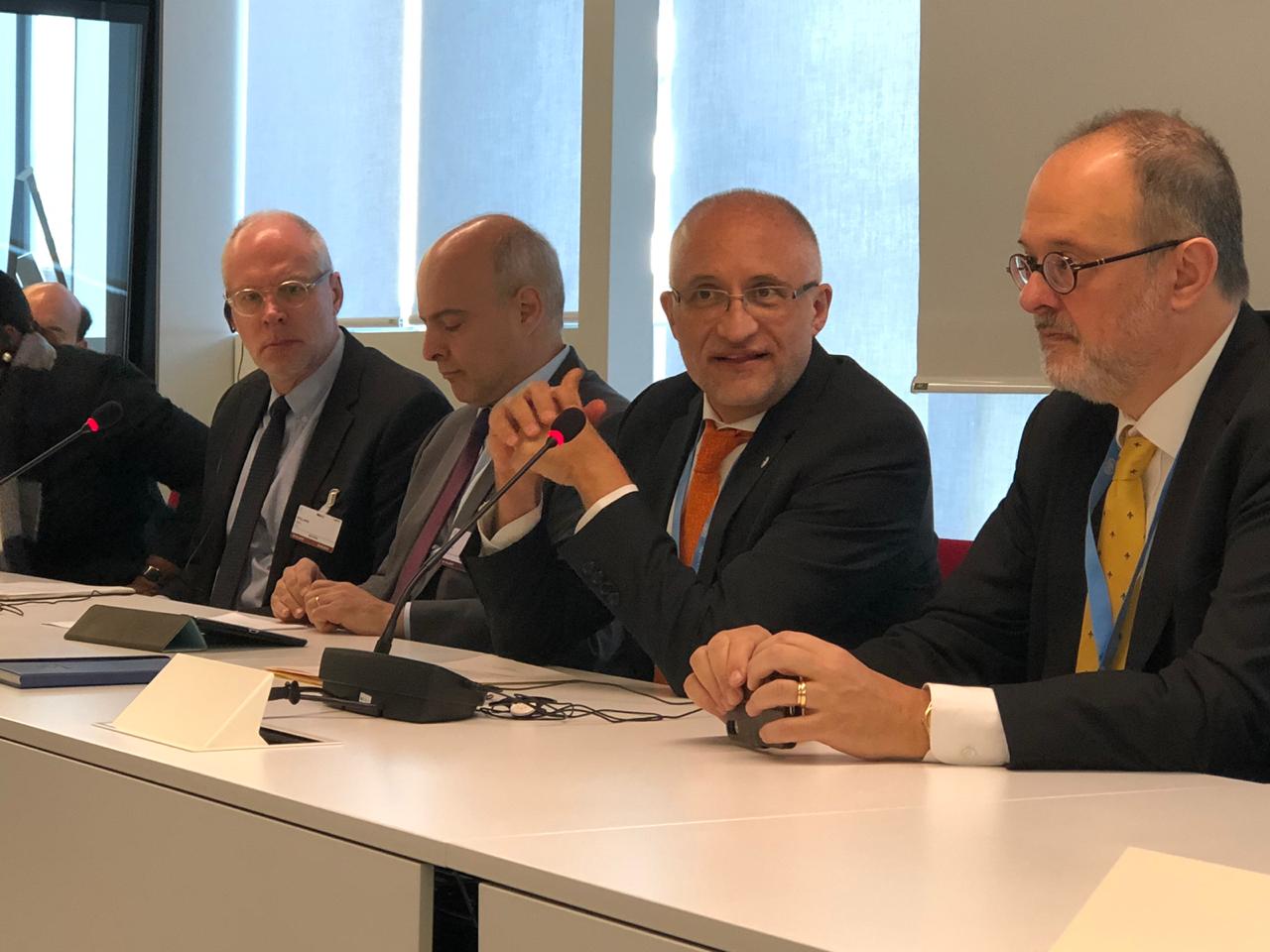 When we returned to the plenary hall, the Member States were still ensconced off-site, deeply engaged in informals.

IPA President Setzer and Secretary General Borghino used this opportunity to meet with WIPO staff and talk about how best to promote the Accessible Books Consortium (ABC), and encourage more publishers around the world to sign the ABC Charter. Stay tuned for activities and promotions in the near future. 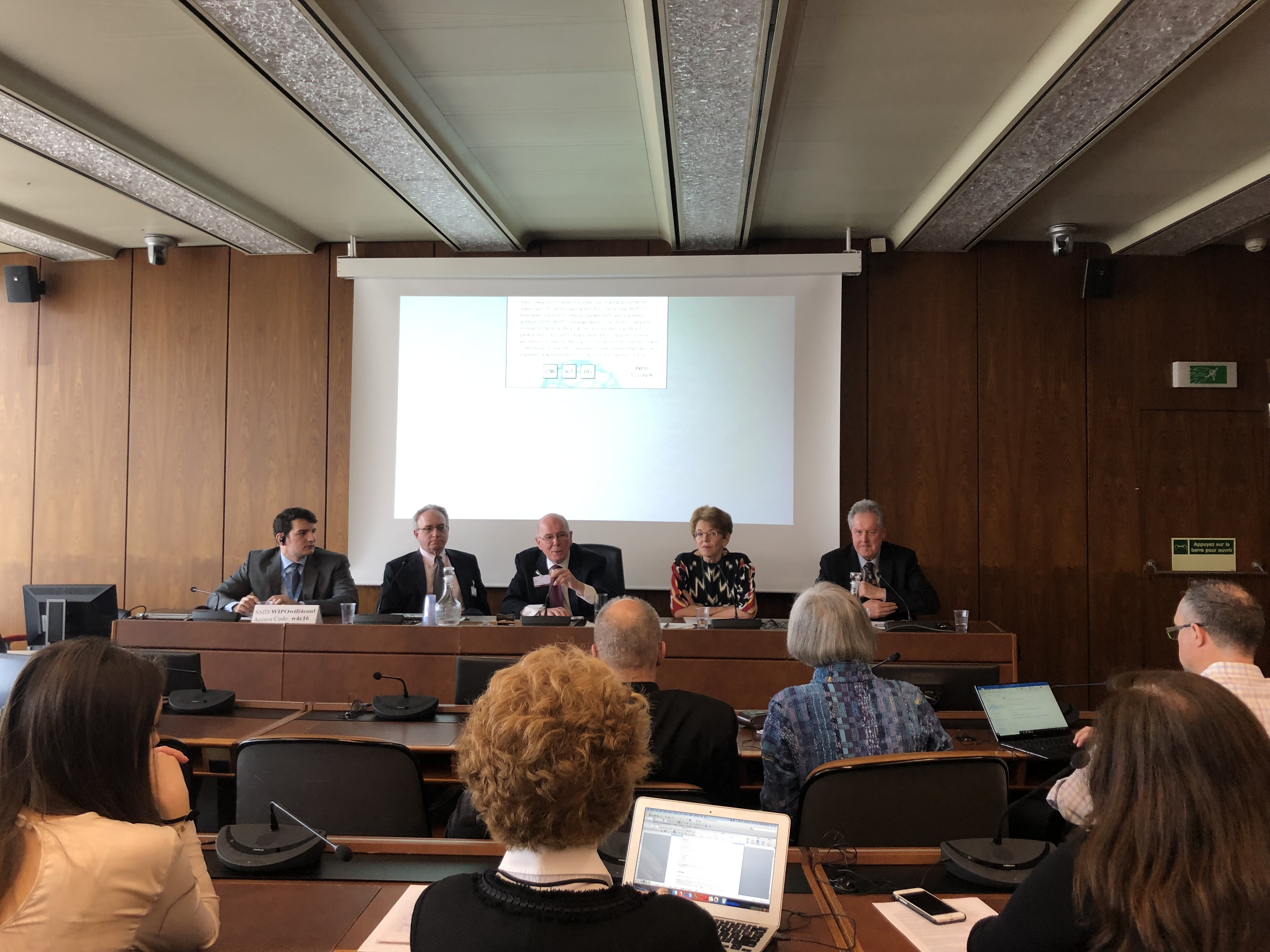 The lunchtime side event was entitled Archives and Copyright: Access to our Documentary Heritage organised by the International Council on Archives (ICA), the International Federation of Library Associations (IFLA), and the International Council of Museums (ICOM). Cauê Oliveira Fanha of the Permanent Mission of Brazil to the WTO opened the session by speaking of the devastating loss caused by the fire at the Brazilian National Museum in Rio de Janeiro in September of 2018, and how such cases bring in to focus the value of archives. Grant Mitchell of International Federation of Red Cross and Red Crescent Societies spoke of the huge range of materials they preserve and the reproductions necessary to enable researchers to consult documents without damaging often fragile originals. In response to one question, he noted that sources like YouTube were in the process of producing lots of orphan works where identifying authors would be challenging in the future. Jonathan Brand of the Library Copyright Alliance spoke of the challenge of orphan works and the effort required to identify rightsholders in a variety of different types of works that probably have little commercial value. Jean Bryden delivered the last intervention, talking about Extended Collective Licences and how they may provide only a partial solution to the challenges of archives.

The audience listened carefully to the different statements. Bertrand Moullier of FIAPF raised the issue of dilligent searches for orphan works, and the agreed procedures used for identification and reclassification of a work’s ‘orphan’ status.  He also noted that while he sympathised with the often insufficient funding of archives he did not see why such underfunding should require the diminishing of exclusive rights. In other words, why should rightsholders be expected to make up government funding shortfalls.

With the side-event closed, the delegates and NGOs filtered back to the informals on the Broadcasting Treaty for the afternoon before coming back into the chamber where Daren Tang reported on very good progress in refining a text that will be open to comments for the rest of the week. Tang emphasised that this was not the Committee text but a Chair's text.

Meanwhile, in Bologna our colleagues were conducting a meeting of the Inclusive Publishing and Literacy Committee, chaired by EC member Brian Wafawarowa. Also in Bologna, the UN Sustainable Development Goals (SDG) Book Club launched its first reading list. And in Luxembourg, the Tom Kabinet case was being heard. We will report on all of these activities in the next IPA Newsletter.

Tomorrow’s side event is organised by WIPO and will look at Technology and Accessibility for People with Disabilities. The agenda will also shift from the Broadcasting Treaty to exceptions and limitations and IPA will have its full delegation present. Apart from the Secretariat, our delegation this session features IPA President, Hugo Setzer from Mexico, Dante Cid from Brazil, Gvantsa Jobava from Georgia, Glenn Rollans from Canada, William Bowes from the UK and Jessica Sänger from Germany.

Check back here tomorrow for another update.