This week I was in San José, Costa Rica, for a WIPO workshop on the Marrakesh Treaty (…to Facilitate Access to Published Works by Visually Impaired Persons and Persons with Print Disabilities), and the Accessible Books Consortium (ABC), on 13-15 June.

Costa Rica’s President Luis Guillermo Solis Rivera chose this moment to ratify the Treaty. His signature, which took place among WIPO delegates at the presidential residence, brought the total number of countries to have ratified to 30, of which 13 are Latin American. 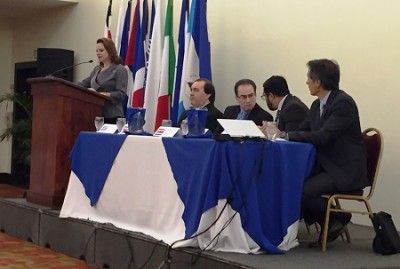 The importance of access to written language is beyond dispute. Children’s cognitive development benefits enormously from continuous interaction with books, magazines, signage and even advertising, and it is right and fair that ‘print disabled’ children have equal opportunities though content in accessible formats.

Not for the first time, however, publishers took some flak for what is wrongly perceived as lukewarm support for Marrakesh. In Mexico, this misconception has not been helped by a legal appeal lodged by a group of 48 publishers against inappropriate amendments to the copyright law passed by congress in 2015. But the idea that publishers are anti-Marrakesh is simply false.

I was compelled to speak up to make it clear that the publishing community, represented by the IPA, is 100% behind the Marrakesh Treaty and the ABC. In fact, the IPA was one of the ABC’s founding stakeholders.

Publishers’ unease – and it is legitimate – is about the risk of over-broad spin-off exceptions beyond those stipulated in the treaty. And this is exacerbated somewhat when, for example, the representative of the world library body IFLA told copyright officials at the Costa Rican workshop  that unless they also support exceptions for libraries “humanity would soon be facing a time of darkness”. This kind of hyperbole helps no one.

Exceptions to copyright, such as those encapsulated in the Marrakesh Treaty, must be handled with care if they are to succeed in doing good without undoing the conditions that enable the creation and publication of quality content.

The road to hell is paved with good intentions, as we have seen in Canada, where near-indiscriminate educational exceptions are doing untold damage to the local textbook industry.

I stressed that publishers, including in the Mexican context, believe in the Marrakesh Treaty, but they are also anxious to see it implemented correctly. I appealed to the numerous regional copyright office directors present to do their utmost to ensure that the treaty’s goals are achieved without creating conflict.

Judging by the response, I think my message of support provided reassurance that the IPA and the publishers it works for are pulling in the same direction as the other accessibility stakeholders. If we can get past the misunderstandings, together we can make the Treaty work.

Hugo Setzer is the CEO of Mexican publishing house Manual Moderno, and the immediate past-President of the IPA. He leads the accessibility taskforce in the IPA's Inclusive Publishing and Literacy Committee.