The morning began with a strategy huddle among the IPA-coordinated Creative Sector Organizations (CSO) group − a coalition of audio-visual, music and publishing industry representatives with a common goal: to protect creators, creations and creativity from attempts to weaken copyright.

The meeting allowed these allies to decide what messages to deliver to a meeting of delegates from the developed countries in the so-called ‘Group B’ collective, which have consistently supported the CSO’s positions in the past. Among various matters arising was what the future may hold for the Standing Committee on Copyright and Related Rights.

More than once – and not only during the SCCR – I’ve heard it said that this unique pool of international copyright policy knowhow could achieve great things if it were both a treaty factory and an ideas factory at once. Quite how this vision would be implemented is tough to envisage, but the SCCR definitely has great potential that would be well channelled by adding a think-tank remit to its norm setting one.

To put it simply, the SCCR puts the people with direct experience of copyright problems in the same room as people with the power to resolve them. That this enormous assembly only happens twice a year and only talks about what new rules to make seems a bit wasteful.

In meeting Group B, the CSO’s objective was to gauge if there have been significant attitude shifts among its members with regard to the agenda items, in particular exceptions and limitations for libraries and archives, and for educational and research institutions. However, even though this question was put to the delegates in several different ways, none present responded substantively. 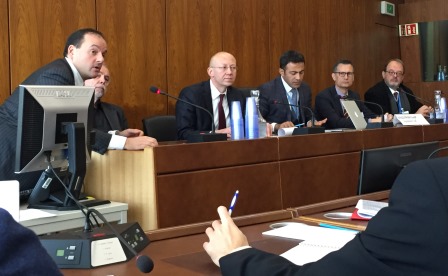 This reticence could suggest that either there have not been any major changes, or that the delegates just weren't comfortable declaring their hand in that context. Such is life in WIPO’s diplomatic pas de deux.

For its part, the SCCR 33 debate has since yesterday afternoon been happening in so-called ‘informals’. These off-site meetings are used to iron out contentious linguistic snippets in a proposed text, or to seek solutions to other matters that are best discussed away from the stiffness of the plenary chamber. We'll learn tomorrow afternoon what progress has been made on the Broadcasters Treaty in these talks.

In the afternoon, the Accessible Books Consortium (ABC) held a ‘side event’ to explain how the Marrakesh Treaty has progressed to implementation. Among the speakers, Pablo Lecuona, Founder of Tiflolibros / Tiflonexos, the Digital Library for the Blind in Buenos Aires, gave an impassioned speech about the revolutionary benefits that the Marrakesh Treaty has already brought to Latin America’s print disabled community.

He said: ‘Latin American organizations making works accessible are typically civil society bodies, not government funded, they’re small, and need to raise funds day to day. We need to work as a network to get results. In Latin America 18 countries speak the same language, plus Brazil, where they speak a similar language. Marrakesh gave us the legal frameworks to enable cross-border exchanges.’

After many hours spent blinking in the fluorescent lighting of WIPO’s cavernous, windowless plenary chamber, it was very encouraging to hear from someone who has benefited, and is helping others to benefit, thanks to the work that is done here.