SCCR 34 opened this rainy Geneva morning, if not with a bang, at least with the hope that proceedings could ‘swing’ under the leadership of the committee’s upbeat new chairman, onetime jazzman, Daren Tang.

After WIPO Director General Francis Gurry passed him the gavel, Tang, who is CEO of the Intellectual Property Office of Singapore, promised to do his best to yield results – particularly on the stickier agenda items. 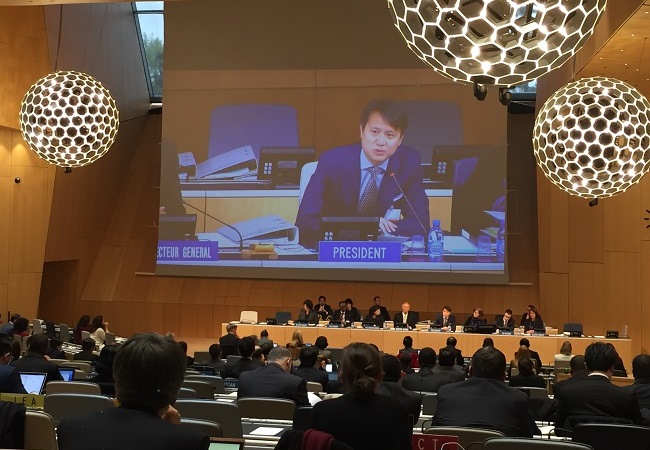 Chief among these is the ‘protection of broadcasting organizations’, which has basically ping-ponged back and forth across the floor for 20 years, despite WIPO’s best efforts to drag it forwards.

Acknowledging the friction, Tang said: “The work has been challenging. Some of the items on the agenda as you know have been around for a long time and I will not deny that they challenge the spirit of openness, transparency and fairness. We hope we’ll be able to give this meeting and all the different agenda items in it the best possible airing, the best possible push.”

Tang also hoped that his perspectives and experience, coming from Singapore – “a bridge between East and West, North and South, developed and developing” – would help things along.

He could be right. WIPO watchers on all sides of the arena are quietly confident that SCCR 34 might actually deliver a long-awaited breakthrough in the form of consensus to advance to a 'diplomatic conference’. That’s where the delegations would pour all the details of the broadcasting text into the cement mixer and see a workable treaty trickle out.

If this happens, it would allow the SCCR to focus properly on the bona fide copyright issues at stake, without the extra complications that have arisen from wedding two so loosely associated issues on a single agenda.

Although a relative newcomer to the SCCR game, Daren Tang is up to speed on its history and the sensibilities of the teams on the field. Flanked by two equally new vice chairs, Karol Kościński, director of Poland’s copyright office, and Senegalese IP heavyweight Aziz Dieng, Tang said that while they embodied three very different profiles, they shared a common belief in the importance of the SCCR’s mission.

He added: “Copyright is unique in that it has an impact on the lives of every one of our citizens, every one of our individuals, and on many, many different stakeholders across different sectors. Whenever we open up or launch a video on YouTube or whenever we access music or whenever we consume or create content, copyright is there, so its impact on all of us is crucial. And so therefore the work on this committee in affecting the lives of everyone out there is of extreme importance.”

In a sense, he was preaching to the choir. There’s no question of the potential impact of this committee’s work on the world, and all present are well aware of it. The inability to make headway has been a source of great frustration to many, who now have their hopes pinned on Mr Tang. His remarks indicate that while he feels the weight of expectation, his shoulders are broad enough to bear it. As example is when he told the committee that success will, ultimately, depend on their ability to work together.

“I would like to think the work of this committee is a bit like a jazz band,” he said. “We all have different times when we will do our little thing, you know, we will have a little improvisation, but in jazz that makes it even more beautiful and even more energetic and it makes it even more dynamic... let's make this swing.”

The question is, can this bandleader draw some crowd-pleasing harmony from the discord?

thanks Ben - as always very useful blog entry - capturing the mood of the day. look froward to reading the technicalities of DAY 2 later!