The first day of the SCCR37 closed with ‘informal’ discussions about the Broadcasting Treaty amid much interest about whether the Argentine and American proposals would lead to a breakthrough or the continuation of the current deadlock.

Tuesday started off for the IPA with our now traditional meeting of the Creative Sector Organisations (CSOs) group, which is coordinated by IPA and includes everything from representatives from the video games industry to those from film studios, TV producers, authors and the music industry. These meetings give the organisations the opportunity to share information on the this week’s debates at SCCR, to reveal any intelligence from WIPO Member States and to co-ordinate common positions. As this SCCR is also shifting focus towards a complex series of research projects, regional meetings and conferences to be scheduled across 2019, we used this meeting to alert CSOs to those parts of the schedule that are definite and those that are to be confirmed. In essence, there will be three regional meetings organised in the first part of the year: one in Africa, One in Latin America and one in Asia. There will be a range of research projects undertaken that will culminate in an international conference in Geneva on 17-18 October 2019, the week before next year’s second SCCR meeting. This date for the conference is particularly difficult for the IPA because it clashes with our General Assembly and other meetings at Frankfurt Book Fair.

We returned to the plenary room to find that ‘informals’ were continuing on the text of the Broadcasting Treaty. By convention, we cannot report on the details of these discussions; we are only allowed to listen in with the proviso that we do not reveal their content. But we can tell you that progress on finalizing the treaty text is slow. 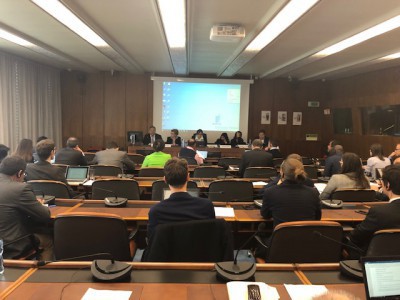 The lunchtime side event today was organised by Knowledge Education International (KEI) and presented civil society views on the proposed Broadcasting Treaty. Predictably but disappointingly, the speakers all focused enthusiastically on the supposed ‘need’ for more Exceptions and Limitations as ‘balance’ and not necessarily only from the perspective of the Broadcasting Treaty. There were presentations on the potential impact of a future Treaty on creative commons works and a challenge to the relevance of the whole treaty discussion given the rise of services like Netflix.

The afternoon session stayed in informals leaving the plenary room with a handful of observers with headsets listening in and lots of side conversations. The room then sparked into life just after 6pm as the delegates came back into the plenary chamber and Daren Tang presented his Chair's revised consolidated text as a way of moving forward on the Broadcasting Treaty. With that he brought that agenda item to a close for today. Tomorrow's discussions will now focus on the exceptions and limitations.

We will also experience two side events. The first one, to be held in the morning, jointly sponsored by Education International, IFLA, and a number of other NGOs will consider a proposed Treaty on education and Research Activities (TERA) and is firmly in the ‘we need more exceptions and limitations’ camp. The second, lunch-time side-event is jointly presented by IFRRO, IAF and PLR International and will be chaired by Mr Andrew Staines, UK Ambassador in Geneva with a keynote from Samuel Tembenu SC, Minister of Justice and Constitutional Affairs, Malawi. It sets out to present ways of reimbursing authors for the revenues foregone when their books are included in libraries.