Yesterday was the first day of the 38th session of the WIPO SCCR. If you need to re-familiarise yourself with what has happened previously and some of the WIPO lingo here are links to previous diaries, our jargon buster and the official SCCR page.

WIPO Director General, Francis Gurry, began his opening remarks by saying that there was now a real chance that the Broadcasting Treaty could be moved along towards a diplomatic conference. He said that there are not so many outstanding issues, that those issues were well-known and that the SCCR could now explore if they could be resolved.

Gurry pointed out that the Broadcasting Treaty was the oldest standing item on WIPO’s normative (law-making) agenda, having been there since the 1990s. And that it was the only part of the architecture for copyright and related rights that has not been updated to take into account today’s digital reality.

As if that was not enough to get Member States in the mood for a Treaty, Gurry reminded everyone that there were some ‘major, major, major sporting events’ just around the corner that were crying out for certainty around the copyright status of broadcasting.

With some parting remarks about the importance of copyright for the ‘digital framework of a globalized world’ and ‘an age when the integrity of information’ is at issue, Gurry left the stage to the secretariat and the Member States.

Having chaired 4 SCCRs in a row, the Singapore IP Office’s Daren Tang had to stand again as a candidate to chair the next four. There were no other candidates, so Members States’ delegates breathed a sigh of relief when he was reinstated to as Chair.

As the meeting gathered momentum, the WIPO Member States blocs and individuals nations were asked to comment on the issues before them.

These are usually well-rehearsed and predictable statements but, still, it was gratifying to hear the representative of the EU saying that the existing international copyright framework can do everything that is required of it and there is no need for a new treaty that broadens exceptions and limitations on an international level.

‘Side events’ are opportunities for NGO observer organisations to put their side of the argument to the SCCR participants. There is a full schedule of side-events this week with two taking place on the first day. 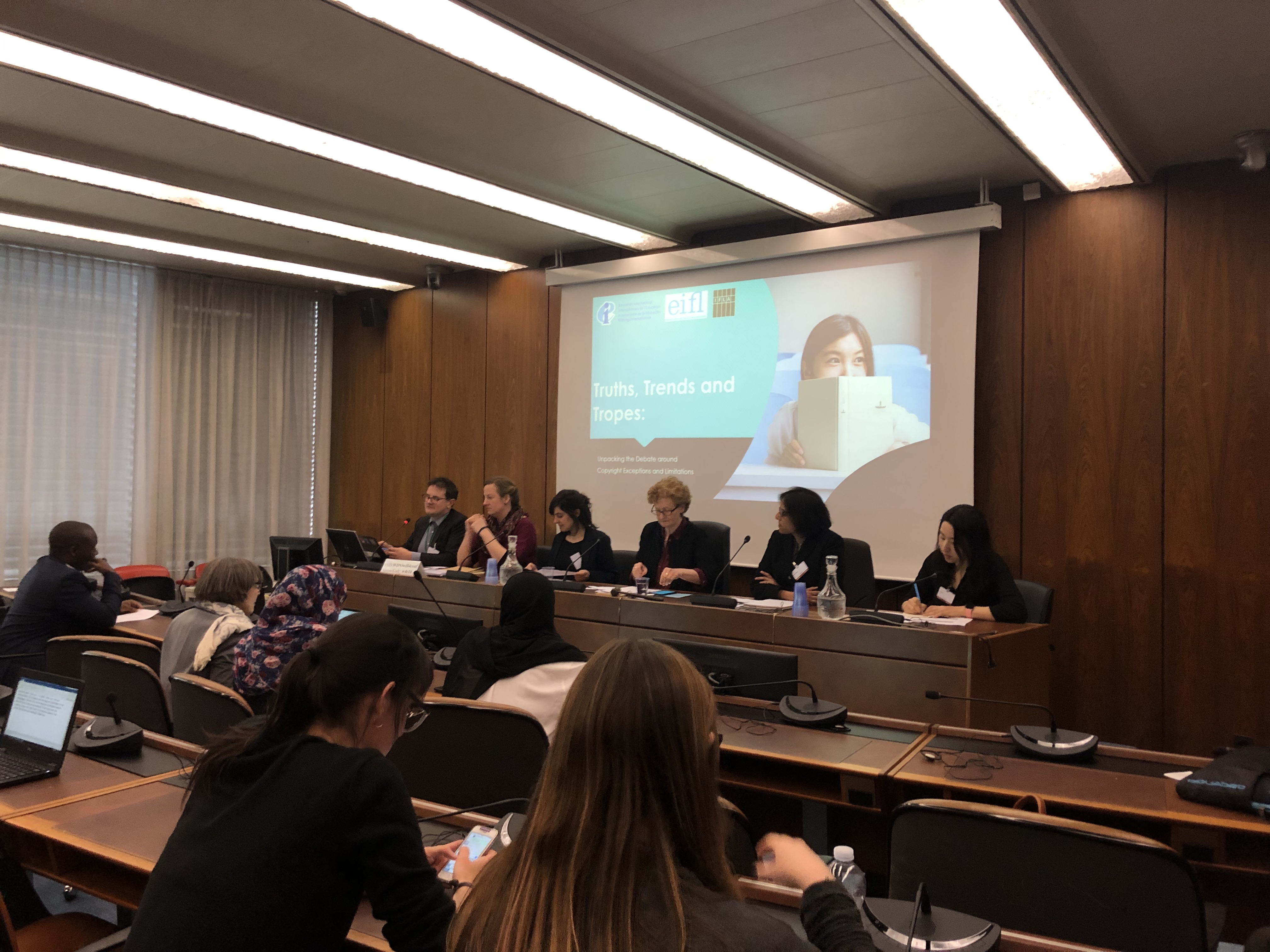 Regular SCCR watchers will have recongised a familiar line-up of speakers from the organisers including Stephen Wyber from IFLA, Nikola Wachter from EI, Theresa Hacket from EIfL, Teresa Nobre from Communia, Victoria Owen, also from IFLA and Luis Villaroel from InnovArte. They sought to inspire debate (and mock authors’ and publishers’ positions) by asking the audience if anyone agreed with statements like Licences can solve everything, and Exceptions and limitations mean the end of markets. They were disappointed when no one took the bait. But disappointingly, these statements were pitched at the extreme end of the discussions on exceptions and limitations.

Unsurprisingly, there followed presentations from the organisers which sought to explain why licences couldn’t solve everything and how exceptions and limitations won’t mean the end of markets. Canada was held up as an example of a publishing market that was growing (by 0.5%) following the copyright law reform of 2012. Glenn Rollans, President of the Association of Canadian Publishers, presented a different picture of the Canadian publishing market where local publishers burdened by the new exceptions introduced in 2012 have been all but forced out of the educational market. He noted that publishers recognised that exceptions and limitations had always been part of a balanced regime, but that the current call for broadened international exceptions in education had gone too far.

IPA Secretary General, José Borghino, also took the floor, saying that the mock questions put to the meeting had not been helpful if the organisers had wanted to promote dialogue. He pointed out that it was wrong to say that publishers were against all and any exceptions and limitations, having been compliant with them since Berne Treaty of 1896. He also argued that the Statute of Anne which codified copyright in English in 1709 had been conceived from the very beginning as a benefit for society and publishers could not therefore be characterised as somehow holding back social progress. In fact, copyright has played a clear part in the extraordinary flourishing of literary, cultural and scientific expression in the past 300 years. He also compared the meagre growth in Canadian publishing in recent years, compared with the success of other countries’ publishing industries where copyright had not been tampered with. 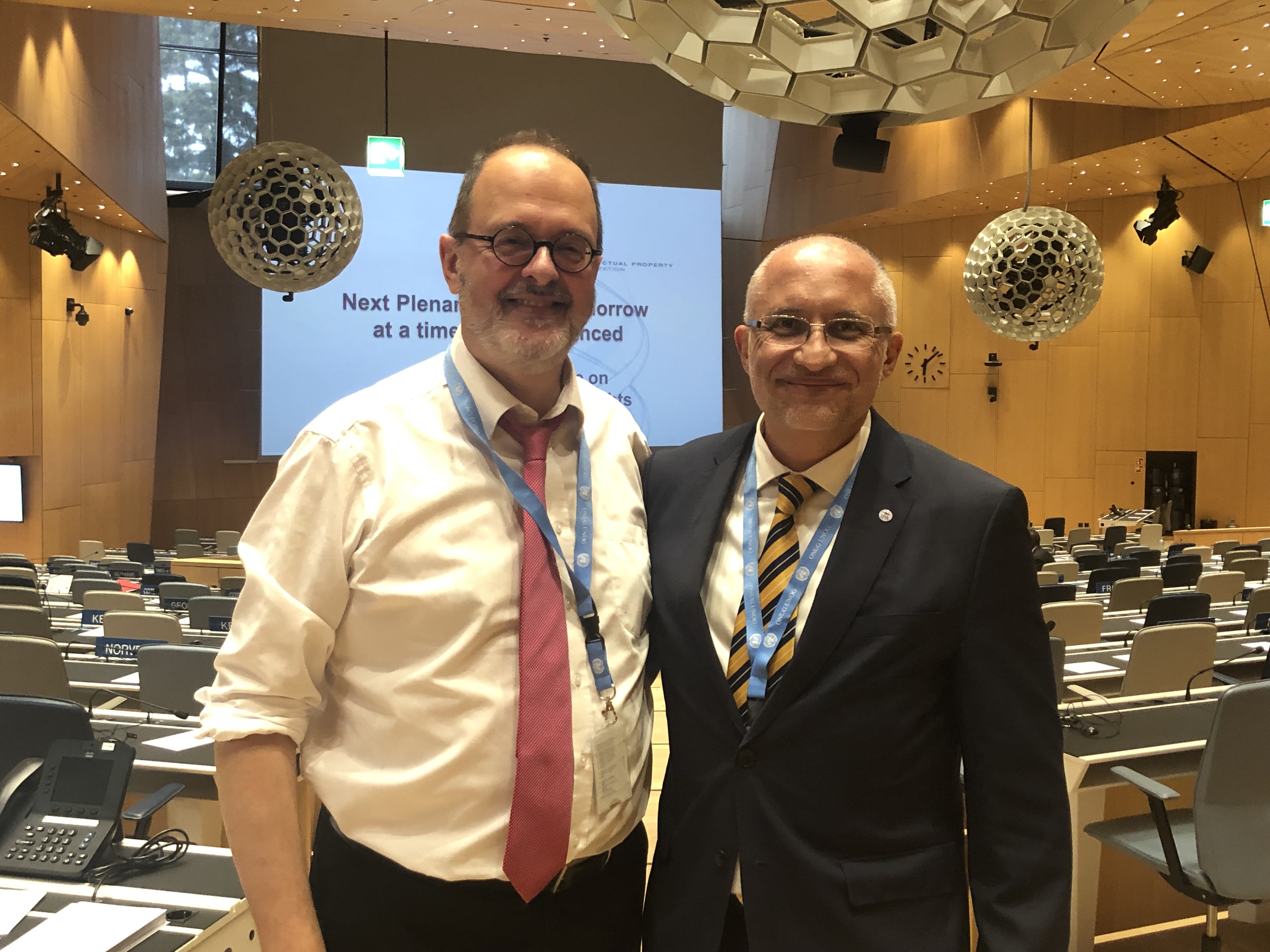 With the side event at an end, NGO representatives returned to the plenary chamber to follow the ‘informals’ on the Broadcasting Treaty. As previously explained, informals are meetings where the Member States leave the plenary chamber to discuss issues ‘in private’. Daren Tang described them as allowing more flexible and dynamic debates. Observers can listen to these discussions but it has been agreed that we cannot report on them.

The evening finished with a celebration of the United States of America’s ratification of the Marrakesh Treaty. WIPO Director General, Francis Gurry, welcomed Member States delegates and NGO representatives and underlined that the ratification meant that the total number of accessible books that would now be available cross-border had risen to 320,000. A video address from Mark Riccobono of the US National Federation of the Blind emphasized how much this ratification means to his community. IPA President, Hugo Setzer, shared his thoughts on the ratification in a short interview for WIPO, stating IPA’s support for the Treaty and its implementation and congratulating IPA member the Association of American Publishers for their important role in the ratification. 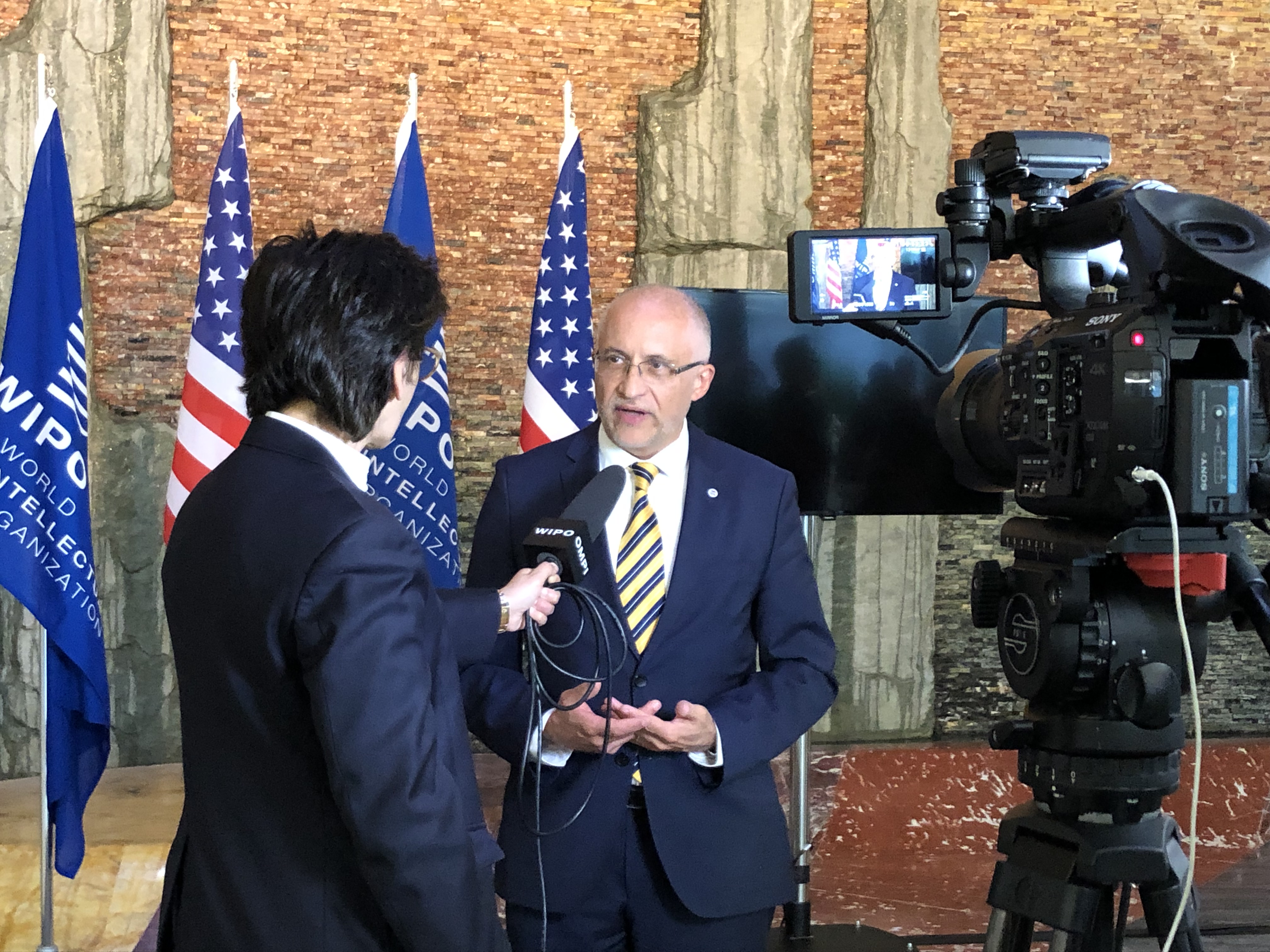 With that, day one came to a close and the delegates drifted out into the warm Geneva night.

Diversity and Inclusion: Disability in the Publishing Industry