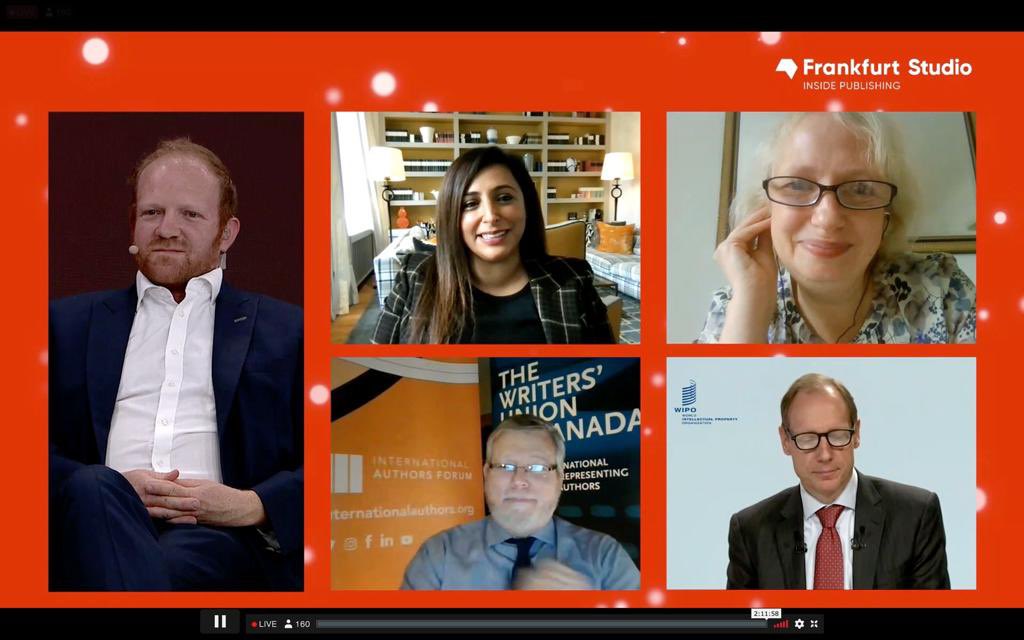 Frankfurter Buchmesse: The Impact of COVID on the Global Publishing Industry

At the 2021 Frankfurter Buchmesse, the World Intellectual Property Organization (WIPO) hosted a discussion on the immediate and long-term effects of the COVID pandemic on the publishing industry. During the 45-minute virtual session, a diverse panel of speakers explored how different members of the publishing industry have been impacted by the pandemic in a variety of ways and how the community has come together to weather the worst of the pandemic.

To begin the session, Mr. Fink outlined some key preliminary conclusions from WIPO’s upcoming publishing industry report, which contained the results of a global survey of the international market in 2020 with data drawn from national publishers’ associations around the world. Mr Fink noted that while the publishing industry did not experience a collapse in demand like some other industries, the crisis has affected the sector in an uneven way, with the experience varying from country to country. There was also an overall shift towards online sales, indicating that the pandemic has accelerated an ongoing trend towards digital distribution and digital consumption. Perhaps most significantly, for a majority of the countries surveyed, it was observed that there was a (sometimes substantial) decline in the total number of newly published works.

Next, the speakers spoke about which effects they had been able to observe as a result of the pandemic, and whether, in their opinion, these effects were likely to subside or persist. IPA President Bodour Al Qasimi echoed that she had observed the uneven recovery among publishers, and how the transition towards digital platforms was a critical component for survival and resiliency during the crisis. She also noted that the pandemic-driven digital acceleration revealed a significant skills gap within the industry as many firms that were not well equipped for such a rapid transformation.

John Degen outlined how authors have struggled significantly due to the pandemic, adding that it was very difficult to say definitively whether they had yet to recover. He spoke of the tragic hidden impact of the pandemic – namely, books not written and authors lost – and emphasized that the sector really came together, organized themselves, and established solidarity among themselves. As a result, authors feel a sense of renewed partnership with their publishing colleagues.

For his part, Andre Breedt noted that the pandemic was a long way from over due to the disparity in how the pandemic has affected different countries, stating “it isn’t over until it’s over everywhere”. He also expressed that in his view, it appears that the industry in general is really only starting its recovery, instead of emerging post-pandemic. He also spoke of how the significance and comfort of books as a medium was reinforced for many during the pandemic.

The session ended on a high note, as the speakers agreed that the shift to digital is critical for the future, and the crisis presented an opportunity to build better partnerships and stronger relations between all stakeholders in the publishing sector moving forwards. They concluded that there will be lasting changes for the global supply chain, publishers, authors, and markets as a result of the pandemic, and while some things will change permanently, some things will revert to how they were pre-pandemic. It remains to be seen what will change and what will go back to “normal”.

You can watch the full sessioni here: