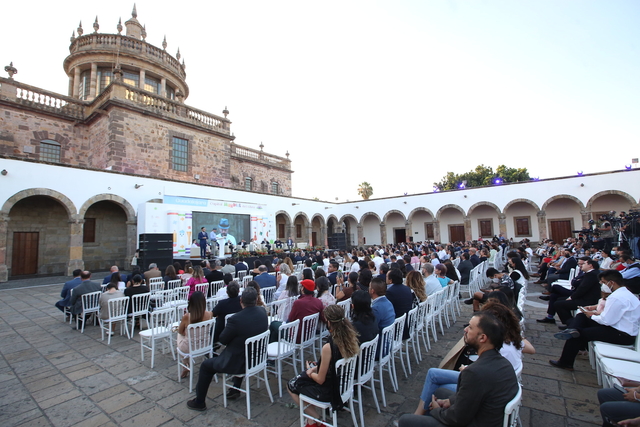 The Mexican city of Guadalajara, capital of the state of Jalisco, became the 22nd World Book Capital City on 23 April 2022. IPA Past President, Hugo Setzer attended the ceremony on IPA’s behalf.

Following an idea proposed by IPA, the UNESCO General Conference decided, on 2 November 2001, to grant its moral and intellectual support to the conception and implementation of the World Book Capital City initiative. The first World Book Capital was Madrid, in 2001.

Guadalajara, of course, hosts the most important international book fair in the Spanish language and is also a vibrant and colorful metropolis, home of tequila and “mariachi” music. It is the third-largest metropolitan area in Mexico, and an international center of business, finance, arts, and culture, as well as the economic center of the Bajío region, one of the most productive and developed regions in Latin America.

The celebrations included a public reading, organized by the Guadalajara Book Fair, its president, Raul Padilla, and its director, Marisol Schulz. Special guests kicked off the day-long event by reading short segments of Portuguese writer and 1998 Literature Nobel Prize laureate, José Saramago’s “Essay on blindness”. Over 400 people registered to read a fragment of the book out loud.

In the evening there was the official opening of Guadalajara World Book Capital. The event was held at the “Hospicio Cabañas” (Cabañas Orphanage), which is one of the most significant and emblematic buildings in Jalisco and Mexico. Now a museum, the building hosts 57 frescoes made by the renowned Jaliscan muralist José Clemente Orozco, including what critics consider his masterpiece: the “Hombre de fuego” (The Man of Fire) in the vaulted dome.

It was in this setting, that Deputy Mayor of Tbilisi, WBC 2021, Andrei Basilaia, handed over the World Book Capital honour to the Mayor of Guadalajara, Pablo Lemus.

The Guadalajara festivities were witnessed by Ian Denison, UNESCO director of the WBC program, and Elizabeth Naa Kwatsoe, Mayor of Accra, Ghana, World Book Capital for 2023.

The evening ended with insightful messages by Mexican writers Ricardo Castillo and Hugo Hiriart, as well as a spirited cocktail party.