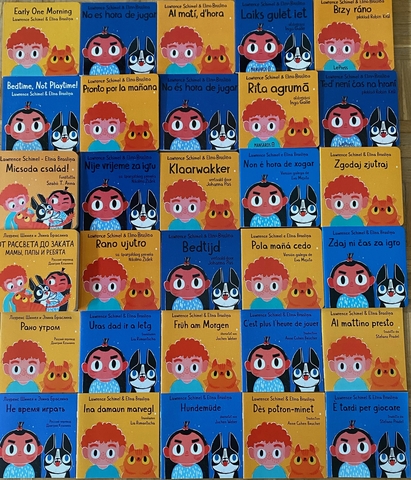 In June, the Kuibyshevsky District Court of St. Petersburg published the full judgement behind its decision of April 21 2022 to liquidate the Charitable Foundation, Sphere, the largest LGBT+ rights NGO in Russia. The judgement clearly states that the NGO’s publication of Mothers, Fathers and Kids from Dusk till Dawn authored by Lawrence Schimel, illustrated by Elina Braslina and translated into Russian by Dmitry Kuzmin, was part of its decision.

The book, a combination of two stories Early one Morning and Bedtime, Not Playtime!, was published on 16 August 2021, with an 18+ label to satisfy requirements under Russian law. At the time 30 different language editions had been published in 24 countries.

A rough translation of the relevant extract of the judgement reads:

During the inspection, 500 copies of a childishly stylized book Mothers, Fathers and Kids from Dusk till Dawn telling about two same-sex couples with kids in an entertaining manner have been submitted. The positive narrative of this book is intended to popularize non-traditional family values. Despite the book having an age limit of «18+», the content of the book obviously targets minors and promotes a positive attitude towards homosexual relationships in family among unlimited number of people, which contradicts the traditional values of our society protected on the legislative level. The book is supplemented by the publisher’s comments in support of Sphere's campaign against the law prohibiting gay propaganda.

Dr. Michiel Kolman, Chair of the IPA’s Inclusive Publishing and Literacy Committee commented: We stand for freedom to publish and reject censorship, especially of those publications that support a more inclusive society where everyone can be their true selves.

Kristenn Einarsson, Chair of the IPA’s Freedom to Publish Committee added: We must fight against this kind of censorship. It is one of the tasks of a publisher to challenge “traditional values” of a society when those values serve to oppress innocent people.

On 25 July Sphere confirmed that they had appealed the judgement with a hearing set for 7 September 2022.