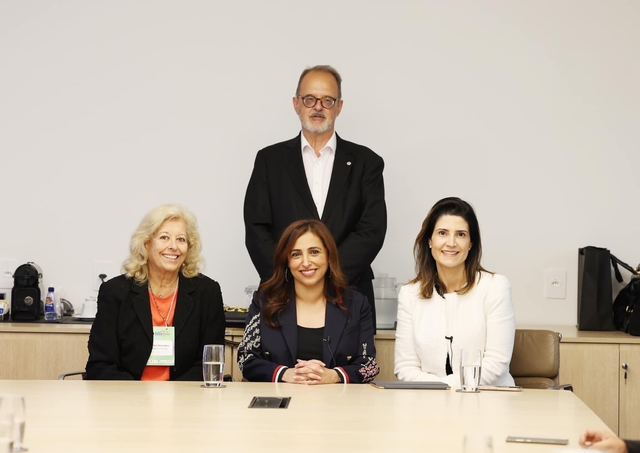 At the beginning of July, IPA representatives — including IPA President, Bodour Al Qasimi, Chair of the Educational Publishers Forum, Stephan de Valk, and Secretary General José Borghino — participated in a series of events scheduled in and around the 26th São Paulo Book Fair or ‘Bienal’.

Apart from attending the inauguration of the Bienal, Bodour Al Qasimi spoke at a session about InSPIRe, at a meeting of PublisHer with Brazilian women publishers, at a joint meeting of the leadership of CBL and SNEL, and at the one-day conference organized by the LatAm EPF called ‘Paths Towards a Quality Education’. De Valk and Borghino also spoke at this conference, as well as having meetings with local educational publishers and IPA members, as well Brazilian EPF member ABRELIVROS and the local xollective management organization, ADBR.

Finally, De Valk and Borghino attended a meeting of the LatAm EPF chaired by Rodrigues which included educational publishers representating Argentina, Brazil, Chile, Colombia and Mexico. The meeting agreed on a dynamic strategy for the next three years that will see the group tackling piracy, focusing on the digital transformation in publishing, and lobbying governments in Latin America for improvement in education policy.